Meditation improves stress and anxiety levels 60% of the time.

Break free from stress  today  with our complimentary relaxation meditation.
Thank you! Check your inbox for your free download.
Oops! Something went wrong while submitting the form.
(Don’t worry, we’ll never inundate your inbox) 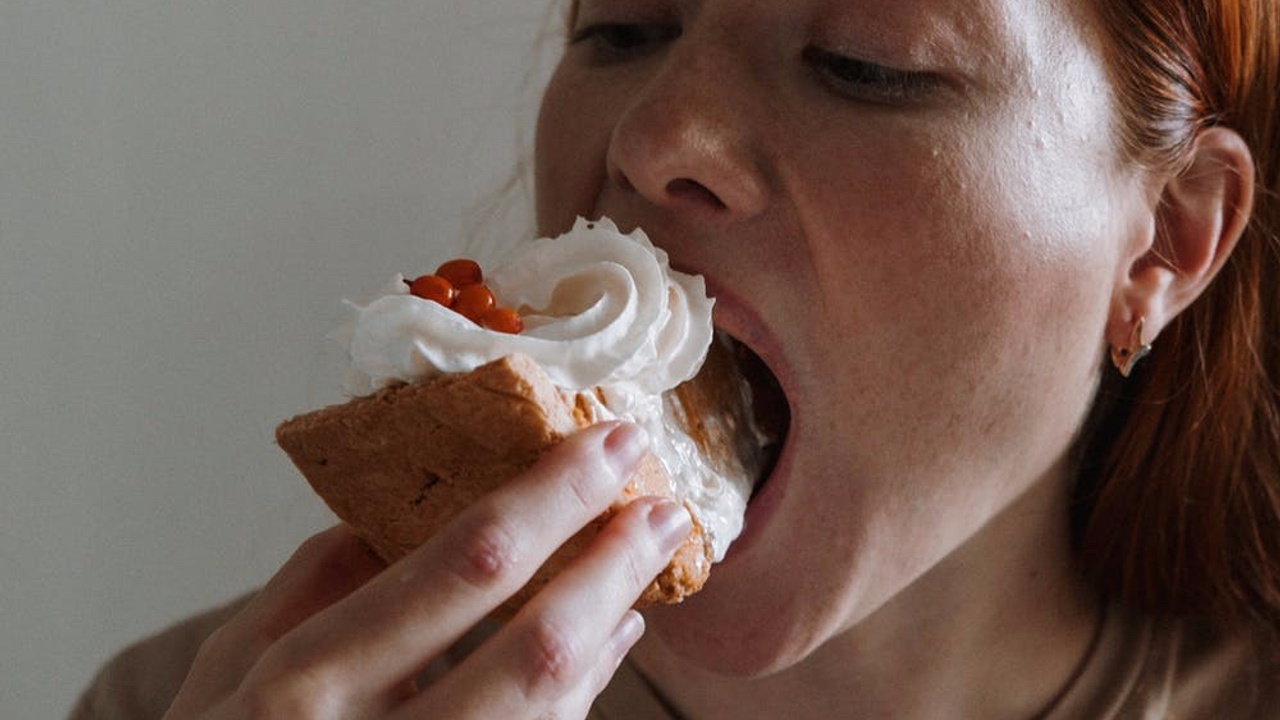 When I was in middle school, after my mother closed the kitchen for the evening and the family was tucked away before bed, I would sneak down and feed myself spoonfuls of forbidden fluff, a jar I had discovered hidden in the back of our kitchen cupboard. I would sit on the floor in the dark and slowly lick the mound of creamy marshmallow from the spoon, sometimes biting it off if my patience wore thin waiting for the hit of sugar. Though I was never caught, I knew I would be grounded if I was found sneaking this delicious blessing to my mouth, after-hours at that.

Food in our house was seen as good and bad, organic or sugar-filled, high carb or low carb, a symptom of my mother’s undiagnosed eating disorder and body dysmorphia. Needless to say, as an adult, I found myself with the same, very conflicted, black and white relationship with food and my body, one riddled with guilt and shame.

As an adult living in New York City, I often found myself seeking refuge at the bodega on my quest to quell whatever pain arose from various conflicts one has in this human existence. Oreos, chocolate Hagen Daz ice cream, strawberry Pop-Tarts, Snickers, Honeycomb cereal, and the occasional Gusher were regularly featured in whatever binge I was using to hide my emotions behind, overwhelming shame quickly following suit. In the darkest part of my emotional eating journey, bulimia naturally evolved as the next phase in attempts to diminish the horrid emotional aftermath of a binge. 2 am orders of penne a la vodka, potato perogies, and fettuccine alfredo riddled my seamless account history, unsurprisingly during one of the most emotionally tumultuous periods of my life.

When I wasn’t binging and purging I was certainly starving myself in an attempt to regain some control in a life that felt like chaos. I eventually got a grip over my overt eating disorders but I never really fixed my relationship with food, unbeknownst to me. Our tense relationship just brimmed under the surface of every “clean eating” grocery store visit, “intermittent fast,” extreme diet, or meal I conveniently skipped. As I grew in my self-awareness, I realized that I used sugar as a drug, that I still had an unhealthy orientation to something that was supposed to nourish my body, and that I was not meeting my body goals because of it. I decided it was time to see a professional.

Enter Shanna of Shine Wellness, the subconscious fairy godmother of my dreams. In meeting with Shanna, I noticed she was unlike most of the other women and professionals I had worked with previously. She was so warm and accepting, non-judgemental, and had a well of knowledge and insight about exactly what I was struggling with. She had a calm affect but an incredibly sharp mind and somehow knew exactly what to say when I needed it. I filled out my intake form after our call and booked my RTT session.

Now, this wasn’t my first hypnotherapy rodeo. A few years prior, after watching a Dr. Bruce Lipton video explaining that 95% of EVERYTHING we think and do and feel stems from our subconscious mind, that our subconscious mind is programmed between ages 0-7, and that the only way to change its programming is through repetition or hypnotherapy, I knew I had to try it. I also learned that it had a far higher success rate compared to the psychodynamic therapy I was already engaged in so I was even more eager. And it did work. Standard hypnotherapy helped me move the needle in my life in various other areas, but I couldn’t help feeling that a few years later I was still in a similar spot as where I started, so I was very excited to hear about the “upgrades” RTT had.

RTT felt like hypnotherapy on steroids. The entire session was 2.5 hours and as part of treatment, I had to listen to the 20-minute recording every morning or night for 21 days. But when I say that I experienced fast results, LET. ME. TELL. YOU.

About a week or so after my treatment, I noticed a distinct change in my emotional eating habits one day following a particularly stressful conflict. I decided to sit with my emotions instead of running from them. Eventually, I got ready for the gym but told myself we could still go to the convenience store to get some sugary cereal if I was still feeling bad by the time we got there. Once inside, I decided to buy water instead and took myself to work out some of my anxiety.

I was BLOWN. AWAY. I texted Shanna immediately what happened, as this was a very clear deviation in patterning. That I was actually taking care of myself and my needs instead of just numbing them out.

There has been one single time I chose to binge in the four months since my treatment. It was around my birthday which is always highly stressful. The positives to note are that the binge was probably half of what it usually was and that I haven’t done it since. I texted Shanna right after and this is normal, the trick is how you handle it when it happens and to make sure it’s not recurring.

Since my session, I have made many other positive changes in my relationship with food and with my body. I did a parasite and candida cleanse, I stopped stressing so much about working out and just go for 10k step walks, I listen to my body and what it wants to eat and when, and I did some personal mindset work around my beliefs surrounding weight loss. And I have FINALLY been losing weight, without sugar binges impeding my progress. I no longer feel guilty about eating carbs and am no longer really interested in highly sugary foods.

I strongly believe my RTT session around emotional eating was pivotal to healing my relationship with food and with my body and jump-started my body goals tremendously. It was a slower process and didn’t happen overnight but I am finally on a good path with a lot of momentum. I can’t recommend RTT for emotional eating more to anyone who feels like they need to work on their relationship to food.  -Morgan May, client

We give you even better content in your inbox. Sign up now. (We will never inundate you.)
Categories
Type A
Weight Management
Meditation
Coping Skills
Life Goals
Mindfulness
Mind and Body
Self Care
Emotional Eating
Hypnotherapy
RTT

Other articles of interest:

The day I heard of Marisa Peer and her unique approach to hypnotherapy was a transformational day in my life...

We are going to illustrate the similarities and differences between two therapeutic approaches to healing: Hypnothera...

Catch us in your inbox for real talk: interesting blogs, breakthroughs and tidbits tailored just for you. (We will never inundate you.)

Thank you! Your submission has been received!
Oops! Something went wrong while submitting the form.